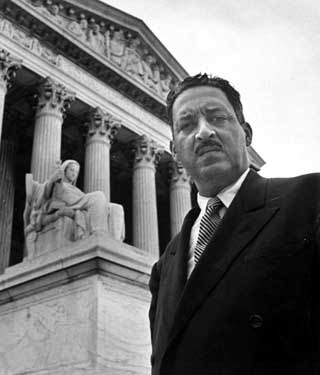 Thurgood Marshall (July 2, 1908 – January 24, 1993) was an American jurist and the first African American to serve on the Supreme Court of the United States. Before becoming a judge, he was a lawyer who was best remembered for his high success rate in arguing before the Supreme Court and for the victory in Brown v. Board of Education. He was nominated to the court by President Lyndon Johnson in 1967. Early life: Marshall was born in Baltimore, Maryland on July 2, 1908, the great-grandson of a slave.
Posted by Kelly Harris at 10:45 AM