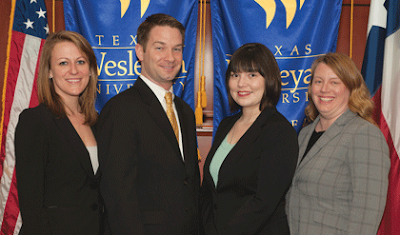 The moot court team of 3L Jill Smith (oralist), 3L Scott Thompson (oralist and writer) and 2L Amy Herrera (writer) won the title of Regional Champions at the ABA National Appellate Advocacy Competition – New York Regional held March 1–3, 2012. Thompson also received the 3rd Place Best Advocate Award. The team will advance to the national finals in Chicago April 12–14, to compete for the national title with the other top 25 teams in the nation. Jennifer Ellis ’05, directory of advocacy programs, coached the team. “This team went undefeated in the competition demonstrating outstanding skills, knowledge of the law and record and ability to converse with the judges. They have worked tirelessly for months, and their dedication and hard work was rewarded by a regional championship and qualification for the national finals,” Ellis said. According to Ellis, this is the first time in Texas Wesleyan School of Law’s history that all three advocacy disciplines – moot court, ADR and mock trial – have advanced teams to the national finals.